Get ready for a special music event with Paul Wookey and Philomena Carroll. Award-winning Paul is considered one of the best flat-picking acoustic guitarists in Australia, and Phil, an accomplished musician on banjo, guitar, double bass and vocals. Together, they will present Ol’ Timey music with a new twist from their vast repertoire of classic and original songs in a variety of genres, including Roots or Americana, Country, Blues, Folk and Bluegrass. 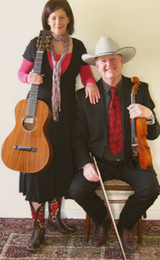 Paul Wookey is one of a very small handfull
of extremely talented musicians who were the
key members of Melbourne’s and Australia’s
acoustic
(called ‘Roots’ or ‘Americana’ these days)
music scene in the late 1970s, and one of
the only ones who has stayed there full time
through the four decades that have followed,
and he is now singing and playing even better
than he ever did, a true master of his craft.
It is hard to put a label on Paul’s music: there’s
Country, Blues, Folk, Bluegrass, etc.. Better perhaps to
look at his influences and heroes, from Doc Watson to
Eric Clapton, from Woody Guthrie to Bob Dylan, to
Clarence White, The Byrds, The Beatles ….. .
And also to look at some of the people who have
enjoyed playing with him through the years …..
Aussies like Mike McClellan, Doug Ashdown, Ross
Ryan, Tommy Emmanuel, and international stars
like Country legends Vince Gill, Albert Lee, Mark
O’Connor and Byron Berline, and blues greats
including Jimmy Witherspoon and John Hammond. Not to mention the many international artists he has
supported in concert, including all of the above as well as Jesse Winchester, Mick Jagger, Charlie Musselwhite,
Mickey Newbury, John Renbourn, even Jasper Carrot, and a score more that have slipped from his memory.
From his early days as a resident performer at the famous Frank Traynor’s jazz and folk club in the 1970s to a
debut album in 1981 that won him the ‘Best New Talent’ Golden Guitar at Tamworth’s Australasian Country
Music Awards Paul has continued travelling upwards and onwards with his music, adding fiddle and electric guitar to the playing that already had him marked as one of the very best
flat-picking acoustic guitarists in Australia, and blooming relatively late as
a notable songwriter, releasing two albums of original songs in recent years,
leading to extensive airplay on ABC Radio National and inclusion on Ian
McNamara’s most recent Australia All Over compilation CD.
Nowadays as well as playing solo and in occasional band configurations
Paul loves performing with his long time friend and now new and first wife
Philomena Carroll, herself a very accomplished musician, on banjo, guitar,
double bass and vocals. Phil was a member of all girl Country group Git
and The Rank Strangers Bluegrass Band, amongst others. Together Paul
and Phil present Ol’ Timey music with a brand new twist, and can throw
in a vast repertoire of classic and original songs from a variety of genres.
For more information visit www.paulwookey.com.au

Lucky Strike is an iconic venue in the heart of Clunes. Relax, dine, wine and be entertained in a uniquely ambient and historic setting.
Fraser St Clunes 3370. Open Thursday to Sunday from 10am Dinner Friday and Saturday from 6pm Public Holidays 10 am to 4pm.

In Lucky Strike Website
you will find everything that's needed to help plan the perfect wedding or event! This site focuses on a network of established and well respected events, birthdays and wedding professionals who are dedicated to providing exceptional services.

All the wedding services showcased on this website are to make the wedding day easy to organise and far less stressful. We hope you enjoy our site and use it to plan your very own Wedding Experience.

Over the next 24 months, we plan to grow our directory by creating one of the most comprehensive wedding resources for Australia, with thousands of wedding related listings, all with links, sorted by State and Category. A User Friendly, Comprehensive Library of dedicated Professionals ... a large list of suppliers nationwide.
This directory will be here to help you from your initial engagement, planning, buying your wedding ring, wedding dress, tiara etc. Booking your venue for the wedding reception, booking your wedding photographer, wedding cars, wedding flowers, wedding video, booking the entertainment be it a band or singer, sending out wedding invitations on your chosen stationery and the final touches such as choosing favours table decorations such as wedding bomboniere, balloons etc.
And of course planning for your Hens and Bucks Parties.